May Le Roy is in her 11th year of teaching at Cathedral City High School and in her eighth year at Nellie N. Coffman Middle School. She has inspired children and adults both as an instructor and a Choral Master throughout her successful career, with some of her former students now accomplished composers & professional musicians themselves. Choirs under her direction have garnered superior ratings, having won Gold & Superior ratings at many of the different national festivals. As a past nominee for Best Music Director from the Desert Theatre League, she considers it an honor and a privilege to have been a music educator for over 35 years. She composed the first-ever Alma Mater for Cathedral City High School. A graduate of Pepperdine University where she majored in Music Education & Piano Performance, she has a Master of Arts in Educational Administration from Concordia University.

She is a member of the American Choral Directors Association (ACDA), the National Association for Music Educators (NAfME) and the Southern California Vocal Association (SCVA).   She spearheaded and re-established the annual district-wide Songfest, which features all the choirs from the district in the once-a-year gathering of students who share the same passion of singing.

A native of the Philippines, she enjoys an active lifestyle and has been married to her husband of 30 years, Dr. Larry Le Roy. 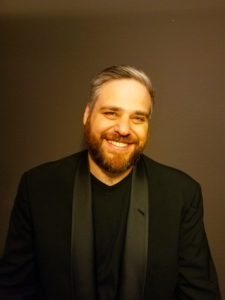 Kurt Jordan developed an intense interest in learning the piano after having seen The Phantom of the Opera with his parents at age 10. He studied under the guidance of Joann Algier throughout middle and high school, during which time he discovered a love of music using multiple pianos. This passion was further explored while studying at Azusa Pacific University under Dr. Robert Sage until 2010 when Kurt graduated with a BA in Music Theory and Composition.

Kurt has performed and recorded several recitals of material he arranged for two and three pianos. These recordings have been broadcast in Los Angeles, Santa Barbara, Santa Cruz, Boston, Austin, and Beirut, Lebanon. In 2009, Kurt had the honor of performing the West Coast premiere of Alvin Curran’s 7 1/2 hour-long

Kurt is an accompanist for many musical groups throughout the Coachella Valley including Harmonic Voices, Melodiam, the College of the Desert, the Cathedral High School Chamber Singers, The Arrangement, and Songshine. The latter is a non-profit organization that teaches speech therapy through music for people with Parkinson’s Disease and stroke.

More recently, Kurt was commissioned to write his very first choral composition. “Kiss the Earth” will be premiered by the Lions’ Pride Chamber Singers.

Matt E. Allen is an actor, singer, dancer, and a proud Lions’ Pride Chamber Singers Alumni. Since graduating from CCHS Matt has continued to show support and gratitude to the Chamber Singers by helping them out with their choreography.  He wants to thank May Le Roy for the continued support she has given him throughout the years. Theater Credits include: vocals on the New Musical Soundtrack Gehenna, Dare (Josh Sloan), The View Upstairs (Patrick), and A Chorus Line (Mike). Tv/Film Credits: “Along for the Ride (Short Film),”  “Quite (Short Film),” and “Trouble Makers (Short Film).” Matt is a proud member of SAG-AFTRA.